A group of students vandalized a pro-life memorial at the University of North Texas on Wednesday, ripping flags and signs from the ground that were placed on the school’s lawn to memorialize babies killed by abortion procedures.

Earlier that evening, members of the school’s chapter of Young Conservatives of Texas had gathered to place 1,000 flags on the school’s property,

released by the organization. Each flag reportedly represented 60,000 babies killed by abortions since the Supreme Court’s 1973 decision in Roe v. Wade. The memorial display was approved by the school.

But only a few short hours after the display was constructed, student vandals descended on it to take it down. The vandals had apparently organized and planned their actions earlier in the day as some of them tweeted about their intentions.

“Can’t wait to spend a Wednesday night ripping out a [sic] 1000 flags,” one Twitter user said, while several others allegedly shared her sentiments.

“Looks like I’ll be tearing them up,” threatened another, according to a report by The Tower.

One individual reportedly even sent a direct message to Young Conservatives President Kelly Neidert encouraging her to kill herself. 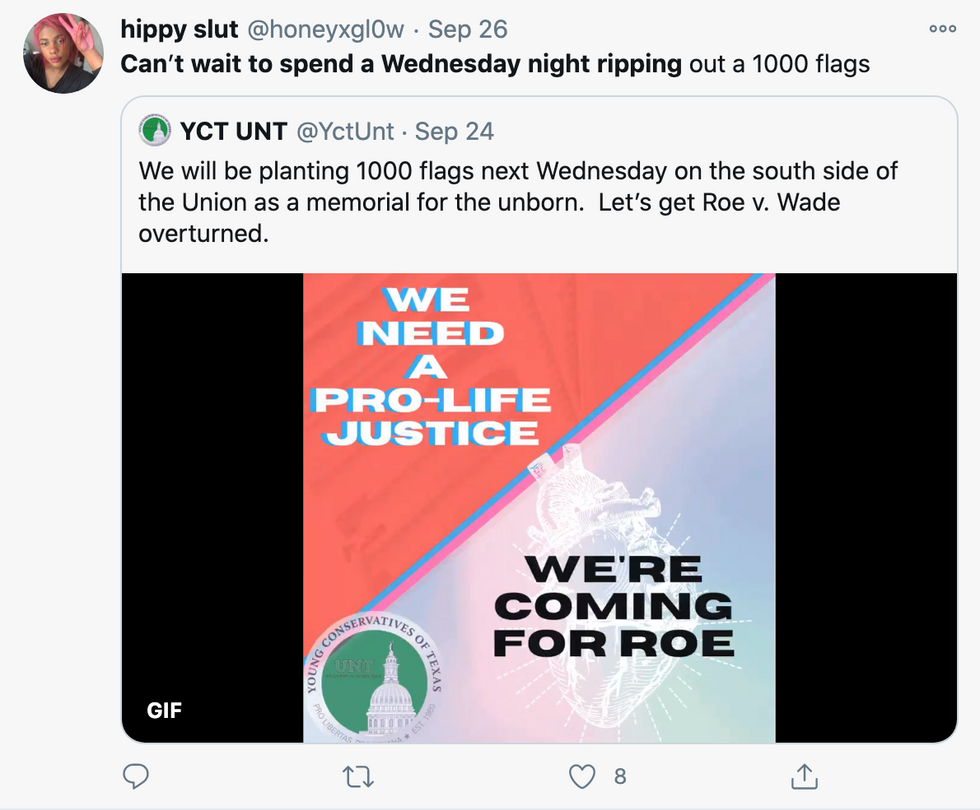 “I was shocked to see my peers so openly desecrating our abortion memorial,” Neidert said in a statement. “The memorial was intended to give a visual representation of lives lost from abortion in a meaningful way. The students had planned this beforehand and had ‘capture the flag’ teams ready to take the flags down. We called campus police but by the time they showed up, everything had been taken or damaged. Overall it was a horrible thing to see.”

One vandal shouted, “it’s a woman’s choice!” and “we should let women choose!” as he walked away from the display with flags in hand.

Watch this video of a liberal vandal scream profanities as he’s confronted about stealing 180 flags from an abortio… https://t.co/25B9Xz4ySA

Ultimately, “more than 350 flags were stolen and multiple signs were taken from the display,” the conservative group noted in its news release. “Chairwoman Kelly Niedert was informed by campus police that an individual had been apprehended and cited for theft of the flags.”

Don’t miss out on new posts

Get the best viral stories straight into your inbox!

Users submit content to site, and we enjoy free speech. If you see something that offends you we don’t care, and CNN is probably your site. Don’t let the door hit you…

To use social login you have to agree with the storage and handling of your data by this website. %privacy_policy%